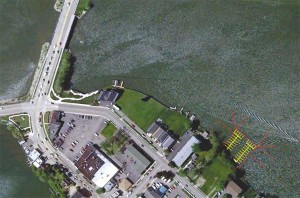 The Belleville Yacht Club has submitted plans to Van Buren Township planners for a 45-slip boat marina jutting out from its property on North Liberty Street, just east of the Belleville Road Bridge on Belleville Lake.

Terry Carroll, interim Director of Planning and Economic Development for Van Buren Township, said his staff has been talking about how to handle it and has decided to consider it a land-use request, which will go through the VBT Planning Commission.

He said this boat dock should be considered in conjunction with the building of a clubhouse, which will be handled by the City of Belleville. At last check, City Manager Diana Kollmeyer said the clubhouse plans had not been submitted to the city.

Reports say the marina request was sent to the MDEQ before the township, which is unusual but not illegal.

Spokesman for the Belleville Yacht Club is Commodore Scott Jones, who has not returned calls from the Independent seeking information on the project and the club.

Jones is president of L&W Engineering in Van Buren Township.

Jones also had a request before the VBT Planning Commission and a public hearing was planned for Feb. 23 for an oversize accessory building he wants to build at property he purchased at the end of November at 13970 Elwell Road, which may or may not be related to the BYC plans.

At 50×100 feet, the building he wants to construct is 788 square feet larger than allowed and 10.6 feet taller than the permitted height of 14 feet.

As to the proposed marina, Jones sent a letter to former Planning and Economic Development Director Dan Swallow on Nov. 19, submitting the club’s plans.

In part, the letter reads: “In summary, our plan is to construct docks for use by our members and guests to enable them to dock their boats, per the attached plan. In doing so, we believe the BYC will enhance our community and bring needed revenue to the down town and township businesses.

“As you will see from our drawings, we will construct and maintain a high quality, aesthetically pleasing dock site.”

A reliable source who has viewed the clubhouse plans said the building is large and is expected to be a showplace. However, parking for the private functions will be in the city parking lot across the street, behind Andrew’s.

Businessman Jeffrey Riggs, an enthusiastic boater on Belleville Lake who lives lakeside in the city, said he is concerned about this big project coming forward “under the radar,” with people not knowing how their public lake will be changed by the addition of this many boats at a private facility.

“This is the busiest traffic area of the lake,” he said, explaining it is just east of the Belleville Bridge, an area that gets congested.

Riggs said by comparison, Johnny’s Grill & Bar has 10 boat slips that protrude 30’ into the lake. The BYC proposal would extend four to five times farther into the lake than Johnny’s, he pointed out. It would be the biggest structure on Belleville Lake.

He said Mission Pointe also was allowed only one dock with no overnight parking and the Harbour Club Marina extends just 30’ out.

Riggs said approval of anything other than a maximum of 30’ of docks from the shore will invite a flood of applications for the same, and potential lawsuits if applicants are denied after a precedent is set.

Riggs has prepared a power-point presentation on the BYC plans and has sent it to VBT officials and others in the community. His report can be viewed at:www.riggsproductgroup.com by clicking on the “BYC Marina Application.”